Talking Baseball Cards ! "How About That" ...

Back in August,  Mark Kaz over at This Way to the Clubhouse wrote about some cards he picked up at the Convention.  They are from the 1989 Topps Baseball Talks Collection.

It is a set of 164, oversized cards measuring 5.25in by 3.25in.  On the back is a record which plays audio clips about the player.  The narrators are Joe Torre, Don Drysdale, and my favorite MEL ALLEN (How About That).  I remember Mel from the This week in Baseball TV show.  Watched it all the time when I was a kid.
In order to listen to the recording, you had to buy the SportsTalk player (sold separately) which came with 4 cards:  Checklist, Hank Aaron, Don Mattingly, and Orel Hershiser.

Here is the TV advertisement :


I do not know why, but I do not remember this product coming out.

WELL....  after reading Kaz's blog,  I went to youtube to see what I could find.  There was the above commercial, plus other listings of cards being played.  After watching a few of those and hearing Mel Allen again,  I said to my self,  "self,  I need one !"

So eBay was the next stop.  First, the SportsTalk Player....  found one at reasonable price with shipping.
The box was a little tattered, but still in good shape.  The player still in its wrapping and cards loose in the box, but still in their nook. 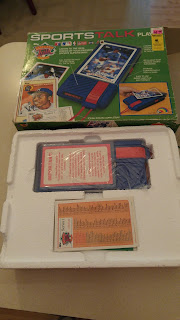 With excitement running through my veins,  I opened every thing up.... 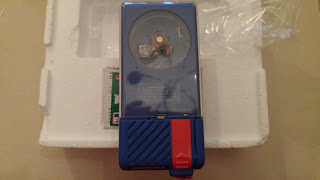 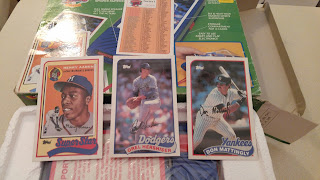 Put the 4 AA batteries in, popped in the Aaron card in anticipation of hearing Mel speak......
NOTHING....... UGH....Ok I must have done something wrong.
Checked everything out, made sure the card was in properly (which is the hardest thing to do, making sure the middle of the record is over the spindle).  Still nothing....
Wasn't going to give up on hearing Mel again (yes I know I can hear him on youtube), so I took the card out, turned on the device and the turntable did not spin.  So like all guys, I was determined to fix it.  No I did not have to take it apart, though it was still an option.  I just gave the turntable a little forced nudge and presto, it worked.  Put Hank back in (wonder if the kids back than had the same issues as this old guy does, trying to get the card lined up right) and shazam, there was Mel talking with Hank.  Fabulous !!!!

At the start of summer,  I had a chance to visit my LCS.

As the owner was finishing up with a customer,  I browsed around looking at all the great items he has.  But there was one card I was really there to see.

He purchased it from the original owner, and he even still had the envelope it came in.

The set had 167 postcard size cards.  They were a promotion by the Worch Cigar Company of St Paul MN.  The owner sent in for a card from the company, not knowing which card he was going to get.  Later, to his surprise, he received this Babe Ruth card.

Once the LCW owner had the card in his possession, he sent it to PSA for grading.

This is a fabulous card, and one that is well out of my budget.

It was great holding the Babe!!!!

Jeff S
Eagan, MN, United States
I have been collecting cards for over 45+ years, and helping other collectors to expand their collections for over 25+ years.